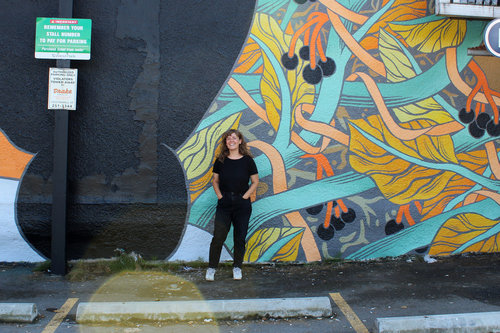 To the common eye it’s easy to see how the definition of street art and graffiti could meld together and even many in these artistic realms use the words interchangeably to describe art on the street. There is a difference and we will explore the nuance along with the styles and the attitude towards both.

Stuart MacKay, a retired librarian, McLuhan genealogist, historian, and Marshall’s cousin-once-removed will start the discussion on graffiti and where it originates from while presenting a McLuhanesque perspective on the topic. As a leading and often controversial 20th century thinker, Marshall McLuhan would have surely had some conclusions on how it affected society and culture.

Our guest speaker, Jill Stanton is a muralist that has had her work featured in the 2017 Vancouver Mural Festival, Toronto’s Underpass Park, the 2017 Wall-to-Wall Mural Festival in Winnipeg, the 2015 Alberta Biennial of Contemporary Art, as well as several private and public mural commissions across Canada. She was shortlisted for the 2017 and 2015 Eldon & Anne Foote Visual Arts Prize.

Jill paints murals with a balance between careful planning and site-sensitive improvisation, resulting in pieces that are tailor-made for their environments. She is inspired by a variety of subject matter; many of her murals feature abstract shapes mixed with familiar forms (such as plants and hands) to manipulate the viewer’s feeling of scale. Currently, Jill is experimenting with using murals to guide the viewer’s eye around the composition on the wall to suggest open narratives.